How to File a Report

A. Who May Report an Alleged Violation – Any person may file a report of sexual misconduct against a Blue Ridge student, student organization, Blue Ridge Staff or Faculty, or Third Party vendors associated with Blue Ridge Community and Technical College under this Policy.

B. How to File a Report – Any person in immediate threat or harm, should call 9-1-1 for emergency assistance. A person may make an anonymous report to the Title IX Coordinator or any persons at Blue Ridge CTC. Please note that all parties of the College, with the exception of the Sexual Assault Response Coordinator, are required reporters and therefore must notify the Title IX Coordinator of any incident. Reports may be submitted via the website or by using the Official Complaint Form. All cases will be investigated. The reporting party may elect to remain anonymous, however, there may be cases where the College may not be able to secure anonymity. Such cases may involve serial offenders.

C. Geographic Jurisdiction – This policy applies to any allegation of Sexual Misconduct against a student, regardless of where the alleged misconduct occurred. It is considered applied if the conduct negatively affects a victim’s school experience or the overall school environment.

D. Timing of Reports and Availability of Procedures – As long as the College has jurisdiction over the reported student, there is no time limit to invoking this policy in cases of alleged sexual misconduct. Nevertheless, persons are encouraged to report alleged sexual misconduct as soon as possible in order to maximize the College’s ability to respond promptly and effectively.

F. Standard of Proof – The Department of Education’s Office of Civil Rights has interpreted Title IX to require schools to evaluate reports of alleged sexual misconduct under a “preponderance of the evidence” standard and that is the standard adopted by this Policy. A preponderance of the evidence exists when a reasonable person, after a careful balancing of available information, would conclude a violation has occurred and the student/organization charged is responsible for the violation.

Primary Sanctions for Non-Consensual Sexual Intercourse/Sexual Assault range from Suspension to Permanent Dismissal. Mediation between the parties will not be conducted, permitted, or listed as a sanction.

Students who appear before the Sexual Misconduct Hearing Board, whether as parties to the proceedings or as witnesses, are expected to provide truthful testimony in accordance with the College’s Honor Code.

I. Effect of Criminal Proceedings – Because sexual misconduct may constitute both a violation of College policy and criminal activity, the College encourages persons to report alleged sexual misconduct promptly to local law enforcement agencies. Criminal investigations may be useful in the gathering of relevant evidence, particularly forensic evidence. Because the standards for finding a violation of criminal law are different from the standards for finding a violation of this Policy, criminal investigations or reports are not determinative of whether sexual misconduct, for purposes of this    Policy, has occurred. In other words, conduct may constitute sexual misconduct under this Policy even if it is not a crime or law enforcement agencies lack sufficient evidence of a crime and therefore decline to prosecute. In such cases, the reporting party may not initially understand the results of the criminal investigation, the nature of criminal procedure, or the grounds for the law enforcement decision not to prosecute. The reporting party in such cases may request that the Director identify a              campus Title IX Deputy to assist him or her in seeking and attending a meeting with the local prosecutor to gain an understanding of the decision to decline a prosecution.

J. Modified Procedures for Alleged Violations of the Sexual Misconduct Policy – With the exceptions below, the investigation and adjudication of reports of sexual misconduct is governed by the policies set forth in the Student Code of Conduct.

1. For sexual misconduct cases, the College’s investigation of the report (including all investigation required to prepare formal charges, if any) will be completed within 60 days of the complaint, unless the Title IX Coordinator or Administrator grants an extension for good cause.  If a case of sexual misconduct is not resolved, the matter will be scheduled for a hearing before the Sexual Misconduct Hearing Board.

2. The Sexual Misconduct Hearing Board is comprised of two members of the faculty or staff appointed by the Vice President of Enrollment Management or designee, one male and one female. Both parties will review the Board members and identify prior to the hearing any conflict of interest. In the event of a conflict, alternate members will be chosen.

3. Both parties may have a silent supporter of his/her choosing present at the hearing. The supporter (even if supporter is an attorney at law) will not participate in the hearing process and will be bound by the rules of confidentiality governing the hearing. All supporters must be named and reported 2 days prior to the hearing date.

5. Both parties have a right not to have their unrelated past sexual histories discussed in the hearing. The hearing officers or chair of the Conduct Board will determine whether proposed testimony regarding past sexual history between the parties is related to the case at issue and may be introduced during the hearing. Direct questioning of either party is not permitted.

6. The reporting party may choose to be physically separated from the charged party during hearing proceedings. This choice should be made at least two working days prior to the hearing. Review of the complaint may be allowed and can be done in a proxy environment.

7. A Title IX Deputy Coordinator will review all evidence submitted to the Sexual Misconduct Hearing Board to determine whether remedial or protective action (such as changes to a student’s class schedule) is appropriate.

8. The Title IX Coordinator will provide the reporting party with notification of the outcome of a conduct proceeding and any sanction(s) imposed at approximately the same time notice is provided to the charged party. This shall be conducted within five days of the decision.

9. Either party has the right of appeal.

A. Right of Appeal – In cases of Sexual Misconduct both the student found responsible and the reporting party have the right to appeal.

B.  Timeline and Form of Appeal

1.  Appeals must be submitted to the Vice President of Enrollment within five working days following written notification of the decision.

2.  All appeals must be in writing and must clearly cite the grounds for the appeal and the evidence supporting it.

1.  A charged party may appeal the resolution on the ground of an excessive or inappropriate sanction.

2.  The appeal must be based on the following grounds:

b. Discrimination in the hearing on a basis prohibited by College Policy which caused an unfair hearing.

c. Lack of sufficient evidence to support the decision.

d. New material evidence that is not merely corroborative or repetitive, unknown by the student at the time of the hearing and pertinent to the case.

e. An excessive or inappropriate sanction.

3.  Appeals for cases in which the primary sanction issued is Probation with Loss of Privileges, Suspension, or Dismissal are considered by the President or designee.

a. “Upon receipt of a timely appeal,” the Vice President of Enrollment Management will present all original hearing material to the President or designee to hear the appeal.

b. The President may decide one of the following:

i. There is no basis for the appeal.  The appeal then is dismissed, and the original decision stands.

ii. An incorrect finding of responsibility was reached.  The President or designee then will dismiss the case.

a. If the sanction being appealed includes suspension or dismissal from the College, the student will not take part in any College function except scheduled classes while the appeal is pending. Where appropriate, the VPEM also may restrict the student from parts of the campus or specific functions or activities during the appeal period.

b. In those cases where the VPEM determines that the continued presence of the student constitutes a risk to the educational process, to him/herself, or to the safety of others, the VPEM may prohibit the student from attending classes until the appeal is complete.

The individual or committee hearing an appeal will have access to the full record of the case and may   invite the appealing party to make a personal appearance to discuss the appeal.  In such instances, the case administrator or the chair of the student conduct committee whose decision is being appealed may also be invited to be present to respond to the appeal.

The student and the administrator or board that heard the original case will receive written notification of the decision regarding the appeal, including the reasons for the decision if appropriate.  The entire case file is maintained by the Vice President of Enrollment will include a copy of investigation, hearing, evidence, findings and all correspondence.

This Policy may be amended, in writing, by the President. 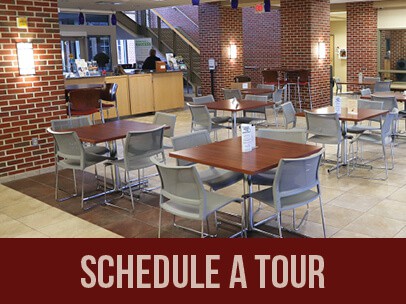